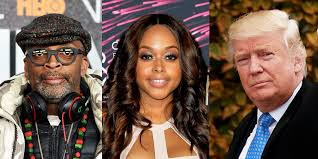 Songstress Chrisette Michele known for her Billie Holiday sound had a career boost by exposing herself to a larger audience after performing at the 2017 inaugural ball and now her name has gone viral. With all the talk about cancelling Chrisette Michele from the black community, let's first assume the responsibility for her last album debuting at #72 on the billboard charts. Folks tweeted "boycott Chrisette Michele" as if they were buying her music in the past. People are mean and hateful, angry - haters everywhere so the fact that Chrisette Michele performed at the ball, creates a question; are there any plans on protesting the albums you all already weren't buying?

According to PageSix "Spike Lee threaten not to use Chrisette Michele’s music because of her decision to perform at the inauguration." And social media went ballistic. You fight against racist ghosts when the real racist is right in the mirror. I support her right to what she wants, is she a slave Spike Lee?? The hypocrisy is disgusting. Good for her, she has a mind of her own and this is what's wrong with this country.

Chrisette Michele responds to inauguration performance backlash: 'I am willing to be a bridge'..According to TrendingNews and the court of public opinion seem to still believe that she did it for relevance. But isn't that what music artists do, try to stay relevant in a forever changing world?

Hey SPIKE...sit on it and pivot! I was already a fan of Chrisette Michele her fans have a higher and greater respect for her now! And the only thing that changed is that because she has now tapped into the Trump fan base, her brand is a viral social media trend online, her music is relevant again and she will go down in history as a performer at the inauguration at a time when it was forbidden. Not to mention she was compensated for the amount of $250,000 a lot more money than musical artists who chose not to attend this historical event!!!