How Effective Are Donald Trump Tweets? 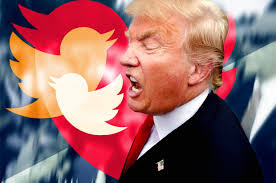 Many hours, many tweets. Here’s a look at how Donald Trump shook the world with just a few Tweets. The chaos theory of Donald Trump: It's interesting how celebrities who bash Donald Trump for tweeting, choose to bash him on Twitter; the irony. Sowing confusion through tweets. If Donald Trump's tweets are accurate, then there's nothing conservatives love more than drinking from "liberal tears" mugs. People have criticized Donald Trump for using Twitter rather than the mainstream media, but can you blame him? The Donald is a viral social media trend in 2017. According to an analysis of Donald Trump's tweets, it's highly likely that the ones posted by an Android device are actually written by him. Here are a few examples of how effective tweets composed by Donald Trump have changed the country thus far.

"Sprint confirmed the news in a statement saying it would "create or bring back to America" 5,000 jobs, mostly in customer care and sales. Sprint's CEO tweeted Thursday that these are new jobs that were not previously planned." According to CNN.

Carrier:
After a series of tweets about Carrier Shipping Company's relocating overseas, Trump took time off from Thanksgiving day to tweet the following: 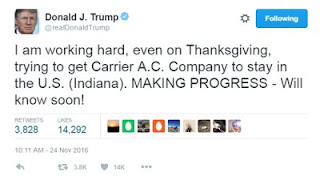 "Mr. Trump and Mike Pence, Indiana’s governor and the vice president-elect, plan to appear at Carrier’s Indianapolis factory to announce a deal with the company to keep roughly 1,000 jobs in the state, according to officials with the transition team as well as Carrier." Credit New York Times.

Ford Motors:
After being criticized by Donald Trump Ford motor company decided to change plans for the creation of their Chevy Cruze model from Mexico and as announced to create their model in America. 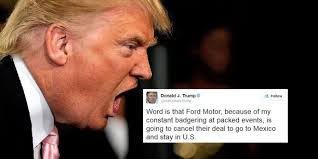 According to USAToday: "Ford Motor announced Tuesday that it would cancel plans for a $1.6 billion Mexico plant and launch a Michigan expansion in a move that may be viewed as a capitulation to Donald Trump."

At the rate that he's going, Donald Trump might possibly eliminate China’s illegal export subsidies and other unfair advantages they have. This brings JOBS back to the USA! It seems as if some Americans don't care about the words that Donald Trump uses as long as he brings back jobs to America. Trump hasn't even been sworn in yet and he's already proven himself to be a great leader and a man of his words.