Who Is This "CashMeOusside" Girl? 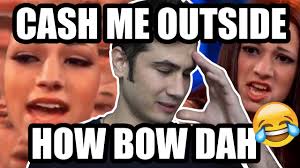 This poor child needs a serious psychological screening. According to Urban Dictionary. On an episode of Dr. Phil, a "difficult" teenage daughter, addresses the crowd using the phrase, "Cash me outside dah." Basically, it means, come talk to me outside so that we can sort out our issues and potentially get into a physical fight.

So let me guess it's the newest social network hash tag trend.  #CashMeOutsideHowBoutDat or #cashmeousside will be the hashtag of the year in 2017, #wellhowboutdat. This is what the reality tv, bad parenting, no discipline, lack of education can do to a child. There's an article floating around where her dad is interviewed. He's some deputy chief in florida(I think) and has been on and out of court her whole life trying to get proper visitation rights because of her psycho mom. She will look back at herself when she turns 35 years of age she will regret her behaviors. And the MEDIA made her a viral social media trend and need to stop giving her fuel to continue to act out. Now rapper Kodak Black is trying to capitalize by putting the "cashmeousside" girl in his music video. 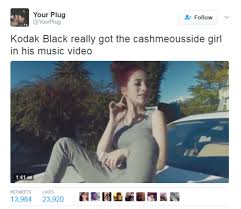 I do not understand why a Family Court judge did not grant the bio-logical father, full custody and then have her put into a BOOT Camp that would straighten her up otherwise she will not make it in life, how sad. She posted a video to her page, booty shaking, barely dressed. She was in a hotel room. Her mother was in the bed, RIGHT BESIDE HER. She's the problem. Cause I'll tell ya right now, my 13 year old daughter WOULD NOT be doing that. I think the mom sees a "cash cow" now...it's almost like she's prostituting her out. The mother is a total loser, she has never moved on from that divorce.is just playing off of the daughters uncontrolled behavior in order to make ends meet.

Some people might say "Dr PHIL exploits vulnerable people for ratings. He is not professional." The following quote, "the CashMeOusside girl is throwing down and throwing punches on TV and on a plane. Is her mother responsible for anything?" According to TMZ. But why did Dr Phil bring her back to his show. She disrespected him the first time now she is doing it again after her mother asked Dr Phil "has there ever been a show that had the highest ratings like my daughter's did?" This so called quote a lot of people are repeating has to go down as the most illiterate repeated quote ever. Or maybe if your in need of an actual real-life situation to use this before it ends up in the black hole of old memes. You no you've watched a video far too many times when you walk round the house saying 'cash me ousside, how bout dat' help me.
Labels: cash CashMeOusside girl CashMeOusside trend me ousside