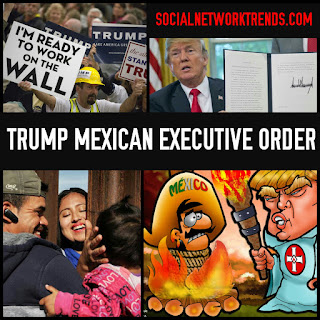 What is the Mexican government doing to help these, their own people? does their own government not care about these people? In all of this very thorny problem to solve no one seems to ask the question. On the other hand it seems as if many of these desperate people are not Mexican at all. They are coming through Mexico.

Who's Really Crossing The U.S.-Mexican Border

In an article from Forbes titled "Who's Really Crossing The U.S.-Mexico Border". The following quote stated "Central America is now responsible for most of the fluctuation in illegal migrant flows northward. Three countries in particular -- Guatemala, Honduras and El Salvador -- account for the bulk of non-Mexican migrants arrested at the U.S.-Mexico border. Because these countries are much smaller than Mexico, they will never come close to supplying a migration surge on the scale of that seen from Mexico in the 1980s and 1990s."

It is my opinion that Trump is solving a problem critics blame him for creating. The President reversed his policy in a way that families will be detained together. The President says that he felt strongly about it because he actually heard audio of the children crying. Congress will work on two separate bills tomorrow as today marks world refugee day.

Before long it will be something else. No one had the courage to fix it. Now let's see what the democrats complain about next. Build the wall and let the wall "be the bad guy." Another article titled


Trump Retreats on Separating Families, Signing Order to Detain Them Together

posted in the NewYorkTimes reveal that “We’re going to have strong, very strong borders but we are going to keep the families together,” Mr. Trump said as he signed the order at the Resolute Desk in the Oval Office. “I didn’t like the sight or the feeling of families being separated.”

The order said that officials will continue to criminally prosecute everyone who crosses the border illegally, but will seek to find or build facilities that can hold families — parents and children together — instead of separating them while their legal cases are considered by the courts.

Mr. Trump’s executive order directed the government’s lawyers to ask for a modification of an existing 1997 consent decree, known as the Flores settlement, that currently prohibits the federal government from keeping children in immigration detention — even if they are with their parents — for more than 20 days." The quote supports the theory that, this is still a portion of a zero tolerance policy, and now we can keep illegal children at the border before sending them back instead of having them integrate into society. This is a huge win for us.