How To Get Featured On The Youtube Trending Page 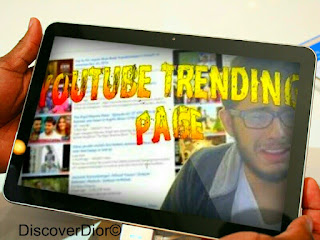 The YouTube trending page is something that creators have been critical of over the past couple of mouths since it was originally introduced. While it was mostly promoted as a social network trend and the main way to find the most trending videos of the day, it never quite turned out that way. The content shows in no way represented what was popular for that particular day, leaving many wondering, what was the point? We've been analyzing this page not because I enjoy the content that they show there, but rather to see if there are any patterns and what content was published. Here are five ways to get onto the Youtube trending page, and it's not really about popularity, It's about the latest viral social media trends online.

Make Content they they like to see. One topic that Youtube seem to love is LGBT related content. If you're a successful Youtuber and you make a video "coming out of the closet", there's a very good chance that they'll place it on the trending page, even if it doesn't perform better than any of your other videos that you usually post. Now just to be clear, I'm not condoning pretending to be gay just for likes and followers. But it could work, so basically if you pander to people who work for Youtube it can definitely increase your chances.

The next way that we discovered through our studies is having a contact at Youtube that will help them out and place them there from time to time. It seem as if Youtube doesn't even appear to care about favoritism either. So if you can't beat'em, join'em. If you want free promotion, we suggest you make friends at there headquarters hopefully they'll give you a boost in popularity.

An obvious way to get onto the trending page is to spend a lot of money advertising on Youtube. Most are aware that you can directly pay Google, to have their video placed on the trending page. It clear to us that major corporation are getting special treatment on the trending page. But we've always doubted that companies were directly paying money to be placed there. If Youtube is actually doing this they would hopefully be telling people that they are ads, but for some reason, no such thing is done.

Another great method is to make Youtube political videos. For years Youtube has been trying to wipe away there image of just trying to be the place to go for people to look at cute cat videos. It might be because of Donald Trump that a lot of political videos show up on there. We believe it's because Youtube wants people to take them more seriously by promoting more serious content. I've hear a lot of people say that " Youtube only promotes liberal content, whereas they hate republican channels". We haven't seen that while studying the trending page, they seem to be very down the middle. It appears that in an attempt to appear unbais, they have purposely made so that they promote as much republican content as democratic content. So if you want to create political videos where ever you are on the spectrum it doesn't really matter.

Finally, the best way to get onto the Youtube trending page is through a new and exciting program, known as "creators on the raise" a new program to promote smaller creators. This will allow selected individuals to get some much needed attention.