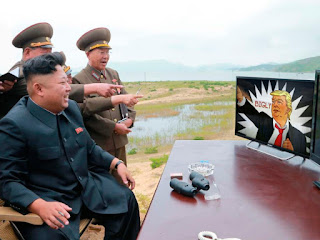 Thanks Obama. Kim Jong Un claims to have ICBM mounted H-bomb. This is what happens when a vicious, adolescent leader is left unattended for 8 yrs. While some feel as if Donald J. Trump is a mirror image of Kim Jong Un. Pres. Trump's "fire and fury" rhetoric is met with defiance by Kim Jong Un- according to CNN.


After North Korean madman Kim Jong Un slackfully conducted ANOTHER nuclear test at approximately 2:15am eastern time on August 3rd 2017. Right after that Japan sent aircrafts to collect air particles after. It's also being reported that Kim Jong Un personally signed off on authorizing the 6th nuclear test.

Kim Jong Un is playing with the U.S. again. Test fires missile over Japan. He anxiously waits to see if we will fire back! South Korea's Moon Jae-in: we'll ratchet up pressure on North Korea until Kim Jong Un agrees to talk. Note that focus is still on talks. That sums it up.  The stage is set. From what we saw the President do to Syria back in April, Kim Jong Un is on the losing end of this. How Hillary would have handled Kim Jong Un & the real monsters of this world if she couldn't handle the SCARY circling debate candidate? You know your country is messed up when you type in "Kim and North" and Kim Kardashian shows up instead of Kim Jong Un and North Korea.

Coincidentally, "Fat Man" and "Little Boy" are also the Japanese code names for Trump and Kim Jong Un. Hydrogen, Kim Jong Un, Nagasaki, Trump, Heatwave, Hurricane. It's the end of the world as we know it and I feel fine. Why is the world just standing by waiting for Kim Jong Un to drop a bomb somewhere? Why hasn't a James Bond type spy bumped him off yet?