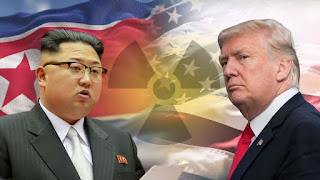 Trump called out "Rocket Man"- Kim Jong Un at the United Nations. One of the best speeches not only at the UNGA but in history-


Trump hit on many big topics. You've gotta love Trump's no-nonsense speech to the UN today.  I don't recall ever hearing a US President speak so clearly.

NO Leader NO citizen should ever be confused where POTUS stands. He says it clear, simple and to the point! Nothing left for interpretation! Respect the USA or face the penalties! #MAGA

Trump's UN speech, shortened: "We got the world's biggest war machine. What we don't use on N. Korea, we will parade down Pennsylvania Ave!" Or it's more: "I'm really pissed that I'm not actually king, so I am going start breaking things till I get my way."

The Twitter hashtag #RocketMan created by Malkam Dior in a reference used by President Trump to nuke the fat kid w/the bad haircut that dresses up as a dictator always cracks me the hell up. When you get a nickname from him, your dimise is inevitable.

Leftists are literally to the point of defending "RocketMan" just so they can bash Donald Trump. SAD! It's absolutely ASTOUNDING....! Hope the 'ladies' on The View have their defibrillators & crying towels aready! President Trump’s UN speech is sending Kim Jong Un to his “Safe Space”

If you're more angry that Trump called Kim "RocketMan", than you are towards N Korea for wanting to kill us all, you are dangerous to America.
Labels: kim jong un Rocket Man Trump UN speech