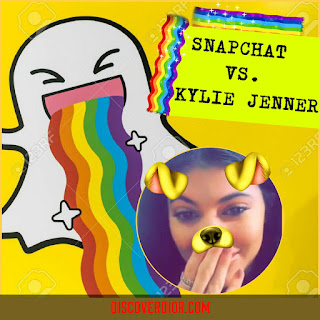 Snapchat responded to Kylie Jenner Tweet after she tweeted that she doesn’t open SnapChat anymore. SNAP lost over a BILLION dollars in market value. After the mega superstar posted the tweet on Twitter.

When a 20-year-old can post a Tweet and your company loses a Billion dollars; you may want to rethink your business model.

Instagram doesn't need to do much anymore, Snap's redesign just accelerating the collapse of the crap platform.

What a sad state of affairs when markets listen to people with the IQ of a baked bean.

If your decisions in life are influenced by this family, then please stop breathing. After Snap's last update I can't see anyone using it. They basically changed into a giant selection of ads; moving personal stories and conversations to the back seat.

Due to Snapchat's new redesign. Snappers complained and took to other social media sites like Twitter to express their anger.
"Snap (SNAP) stock closed down 6% on Thursday after the reality TV star said she is no longer using the app. The plunge wiped about $1.3 billion off the company's market value.


Jenner has been one of Snapchat's most influential users" according to CNN so this is the reason why Snapchat responded back to the Kylie Jenner Tweet.

We've reached an evolutionary dead end when the Jenners and Kardashians have this much influence in society.

Well according to Recode "Snapchat’s redesign was meant for your friends, and celebrities aren’t your friends, says CEO Evan Spiegel. Kylie Jenner doesn’t like the Snapchat redesign — but Snap didn’t change things for her". Could Kylie face a huge lawsuit over a controversial tweet?

I stopped using Snapchat when Instagram stories came out. This happens. Keep your app fresh otherwise, it will suffer from other innovative apps taking over. Snapchat app was too large, and I was honestly bored of seeing the same people's stories of them drinking every weekend and lipsynching in their car to lame music. I find more creative and interesting people and stories on Instagram.