What is IGTV? Instagram TV is a new vertical video streaming service, not limited to one minute. 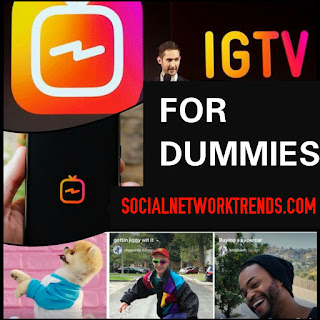 Record video blogs, behind the scenes clips and makeup tutorials. Here's how to get it now.

According to the info center on Instagram "IGTV is different in a few ways. First, it’s built for how you actually use your phone, so videos are full screen and vertical. Also, unlike on Instagram, videos aren’t limited to one minute. Instead, each video can be up to an hour long."

How To Get IGTV?


The quote goes on to say that, "after a shocking Instagram press announcement "Update: We launched IGTV at an event in San Francisco featuring many of the Instagram creators who’ll make IGTV great. Check out the video of the event to learn what IGTV is, how it works and see it come to life.

Today, we have two big announcements to share. First, Instagram is now a global community of one billion! Since our launch in 2010, we’ve watched with amazement as the community has flourished and grown. This is a major accomplishment — so from all of us at Instagram, thank you!

Second, we’re announcing our most exciting feature to date: IGTV, a new app for watching long-form, vertical video from your favorite Instagram creators, like LaurDIY posting her newest project or King Bach sharing his latest comedy skit. While there’s a stand-alone IGTV app, you’ll also be able to watch from within the Instagram app so the entire community of one billion can use it from the very start."

Doesn't seem like an awful idea. In general, social media stars constantly say they need to be putting out content all the time (which is understandable).. but also.. it'd be nice if there weren't countless 30+ minute videos posted every day.. I need a break and more time.

In an article titled "With IGTV, Instagram Takes Aim at YouTube, posted in Wired says that - "From both a consumption and a content-creation perspective, IGTV is going directly up against YouTube, which just announced it has more than 1.9 billion monthly logged-in users, and is already well established as a place for creators to distribute long form video."

I've used it to created a vlog for an upcoming project for millennials in SEO, it seems okay as long as it doesn’t sabotage Youtubers. I’ll always stick with Youtube, it’s what I know and love and all my favorite creators like you guys are on there!

What do you think of IGTV?