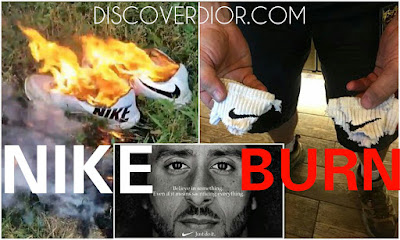 The ad featuring locked out NFL player Colin Kaepernick triggers calls for a boycott by millennials thinking it's about the anthem. Shoe giant stock dropped as other sport stocks remain the same.

I really do respect what Kaepernick is trying to get across our Great Nation and I feel its totally wrong for the likes of "Nike" trying to cash in on one person's view! Kaepernick has ben persecuted by the NFL as well as others. Why try to make money on his suffering?!

Last year Colin Kaepernick was in the top 50 in NFL jersey sales, despite not being on a roster. Nike made a business move.

"On Monday, Nike unveiled an ad campaign celebrating the 30th anniversary of its “Just Do It” campaign, featuring Colin Kaepernick, the former San Francisco 49ers quarterback who began the practice of kneeling during the national anthem to protest racial injustice in 2016 and hasn’t played professionally since.

The ads, which feature a close-up of Kaepernick’s eyes and the text “Believe in something. Even if it means sacrificing everything,” immediately reignited the debate over the propriety of the protest.

One side, led by President Trump, says that refusing to stand during the anthem is an insult to the nation, flag, military and veterans, while the other argues that the military fights for Kaepernick’s right to protest in the way he sees fit". USATODAY

Colin Kaepernick Nike ad: What Hollywood is saying about the controversial campaign

It'll be interesting to see if using a "victim" as its poster child will be more successful than using athletes that were actually good enough to excel at their sport. But not good enough to keep from going 3-16 at the end of his career?

According to Forbes - Colin Kaepernick's protests are resonating with young consumers and athletes—and Nike is cashing in.

"By Tuesday, boycott talk had begun, with Kaepernick critics burning or cutting up their Nike gear. John Rich of the country duo Big & Rich tweeted that their soundman, a former Marine, had cut the swoosh logo out of his socks. "Get ready Nike. Multiply that by the millions,” he warned. (Indeed, Nike's share price dipped by about 2.1 percent Tuesday morning.)


Business move? possibly BUT a petty level 10,000 move because Nike has a partnership with the NFL until 2028!! Nike. For. The. Win. Short term pain, long term great success! Millennials burning their Nike gear that Mommy and Daddy bought them. They know everything about his protest.

Rich wasn't the only celebrity speaking out about the ad, but so far, he has been in the minority.

Here's what other stars had to say:

"Child, please," scoffed singer Tevin Campbell to boycotters. "(Nike will) be more than ok if you do and I’m sure they anticipated this foolery."

Child please. They’ll be more than ok if you do and I’m sure they anticipated this foolery. #NikeBoycott
— Tevin Campbell (@tevincampbelll) September 4, 2018

People are destroying their Nikes after the company booked Colin Kaepernick to lead the latest ‘Just Do It’ campaign.

So here’s my question for Nike: if Mr. Kaepernick wore socks mocking Muslims or gays, would you hire him to endorse your products?

Nike figured you folks in before they made the decision to cash in, and make Kaepernick the face of Nike.

Nike's stock was down 2.5 percent on Tuesday after the company's controversial new ad featuring former NFL quarterback Colin Kaepernick was unveiled on Monday.

Parents will no doubt buy them for their Kids, and they don’t want to be associated with team hate. The long-term effects is that, "We folks" make up more than you think.... Their stocks will continue to plummet! Politicizing sports is likely to result in polarizing demographics.