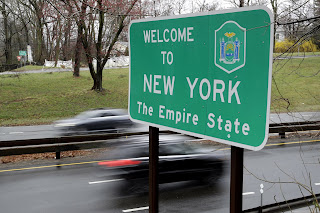 A travel  agency that promotes travel to New York City says the post-pandemic rebound in tourism could take until 2025 to fully recover
NEW YORK CITY (WABC) -- A troubling new forecast about post-pandemic tourism in New York City predicts the city won't see a full rebound until 2025.The Big Apple attracted nearly 67 million visitors last year, but NYC & Company, the city's tourism promotion agency, now projects that the bounce back won't begin until the middle of next year with a return to pre-pandemic totals in 2025.
"The New York City travel industry began 2020 in good position for another record year, with very strong performance in January, February and early March," the agency said. "The public health and safety measures put in place in mid-March to address the pandemic put practically all leisure and most business travel on hold."That caused "an unmatched drop in visitation" over the past nine months, and the year is on pace to finish with tourism down 66%.
Also Read: Brooklyn funeral home shut down months after bodies found in U-haulsThe domestic market was only one-third of typical annual travel and was partially sustained by regional travel, which began to pick up in summer. The international market was down over 80% compared to last year, as inbound international travel has been frozen since April.

"With a plan for widespread vaccination taking shape for Q1 2021, the outlook for a pick-up in regional and short-haul domestic travel will begin to lift the levels of visitation in the late spring-early summer," the agency said. "If the health breakthroughs align with lifting restrictions on activities and gatherings, the pace may move more quickly."Officials said the international market will take longer to catch up, but could pick up 2 million visitors by year end.
Labels: covid19 NY Tourism